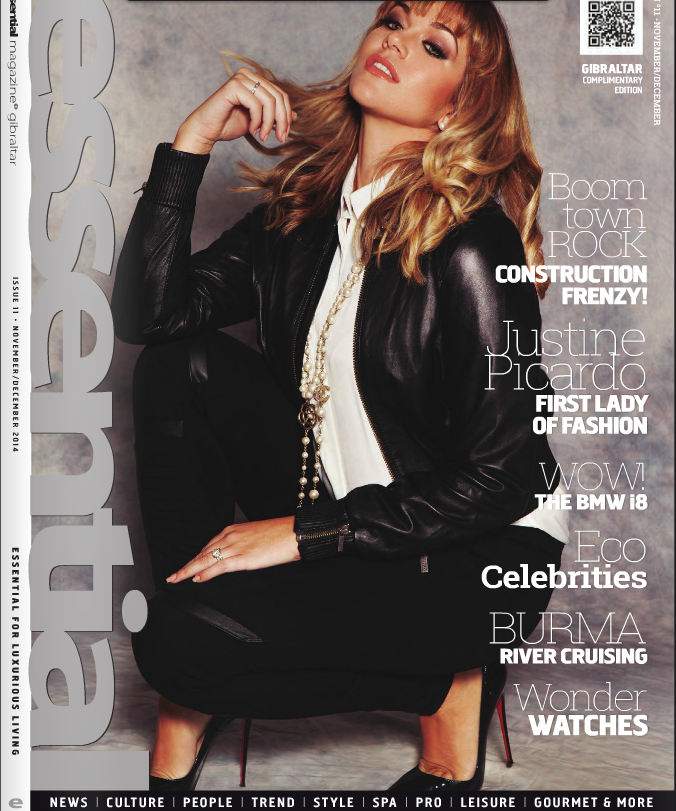 The title used by the magazine Essential (Nov/Dec 2014) to head a series of articles on the current Gibraltar property scene is "Boom Town Rock".

On the front cover a fashion photograph of Justine Picardo and inside equally stunning data on the City of Gibraltar’s performance in property development terms. “1,000 government-subsidised homes, a second five star hotel, (no less than) five high rise office projects including a World Trade Centre – a building bonanza worth in excess of £259m. That’s not counting the university, the UEFA football stadium, and the “biggie” of them all, a multi million pound project to develop Eastside with a swanky marina to rival the world’s most luxurious of resorts”.

“Essential” reports Deputy Chief Minister Dr. Joseph Garcia as saying that the Development & Planning Commission processes between 30 and 40 applications of different scales every single month and that there is unprecedented interest from investors.

Chestertons Estate Agents’ Mike Nichols says that Imperial Ocean Plaza, a developments sold “off plan” was sold out in 5 days in which a cool £46 million worth of real estate “was spoken for”.

Commenting of the “Essential” articles Charles Gomez whose law firm represented parties in nearly 500 residential transactions and some 20 commercial sales / lettings in 2014 marvels at the contrasts: “ Next to the “Nature Reserve” one of the most beautiful and emblematic natural parks in the world with views over the Straits of Gibraltar to Africa (a mere 15 miles away) five villas in what is known as “the Sanctuary” are being built at prices of £10,000,000 each.

The reality is that Gibraltar boasts a large area of supreme natural beauty which is within walking distance (for the moderately fit) of the busy City. Similarly the old Town is being regenerated with many old buildings being restored to their former glory and one imaginative developer has turned a grand old house in the “Upper Town” into a boutique hotel”.